What is Slack’s secret to growth?

My coworking office recently had to decide which group chat application we were going to use. We’d started with Kato because it was free, but members soon started to complain:

Can we use Slack instead?

The reason our members wanted to switch wasn’t because of features. Functionally, Slack and Kato are very similar. Both applications are web based, have an interface inspired by IRC, feature useful integrations, and support emojis.

So why did our members want us to switch? The answer to that question is in this screenshot: 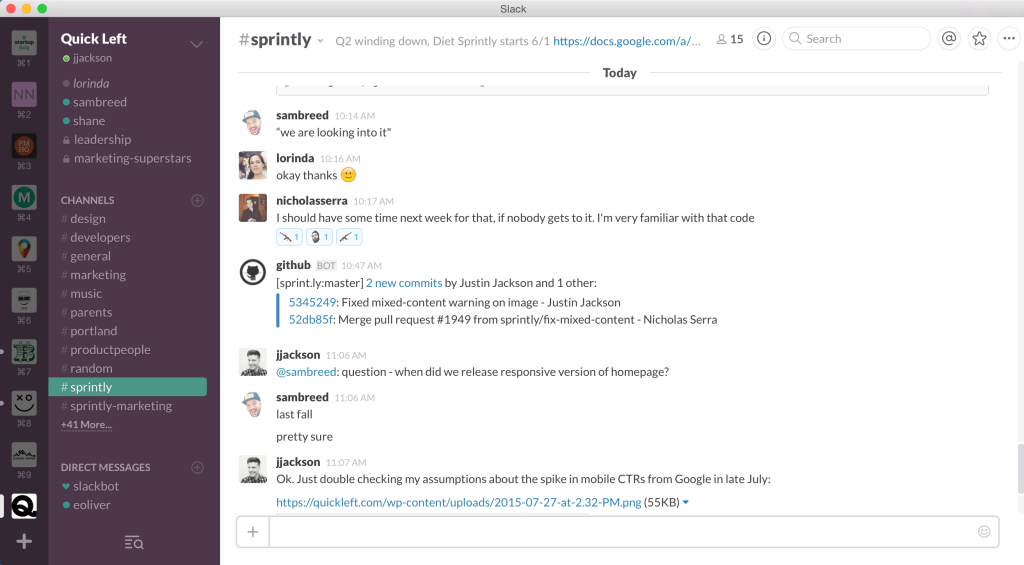 There are two elements to pay attention to here:

Even though Slack is a web application, most people run it in the desktop client. For users with two monitors, the Slack app is running in one of their displays for most of the day.

“Before Slack you wouldn’t think of using group chat apps in non-work contexts. Who ran non-work Hipchat or Campfire instances? No one. So Slack isn’t just easier to use in multiple teams, it’s more attractive because you can justifiably have multiple teams.” – Jamie Lawrence

This is why Slack is so sticky: they’ve combined support for multiple teams with a desktop client that sits apart from the web browser.

Nir Eyal, the author of Hooked: How to Build Habit-Forming Products, talks about how users become invested in the Slack ecosystem:

Users put in a bit of work into the product to make it more useful and therefore increase the likelihood of using it in the future. Slack understands the power of getting users to invest. The company wants to maximize usage and therefore opportunities to form the Slack habit.

The user’s “investment” in the Slack desktop client (as well as the mobile app) is a huge strength. If your team is considering which chat app to use, it would be a huge inconvenience to have to log into something else when you’re already logged into other Slack groups.

My guess is that demand from employees is causing a lot of teams to switch to Slack. This is exactly what Kato said when they decided to shut down:

Why? In short—Slack ate the world and we failed to gain traction.

Desktop and mobile clients as a defensible advantage for web apps

I think having an application wrapper for your web service does make it more sticky, simply because your app doesn’t become just another tab in the user’s browser. The application gets its own icon in the dock. It’s set apart.

Window management is actually a key piece here. Managing multiple browser windows and tabs is a pain. However, in both OSX and Windows it’s easy to switch between apps (in OSX you use Command-Tab). On a Mac, Mission Control shows all of the apps you have open as distinct identities, but browser windows are shown as a messy pile: 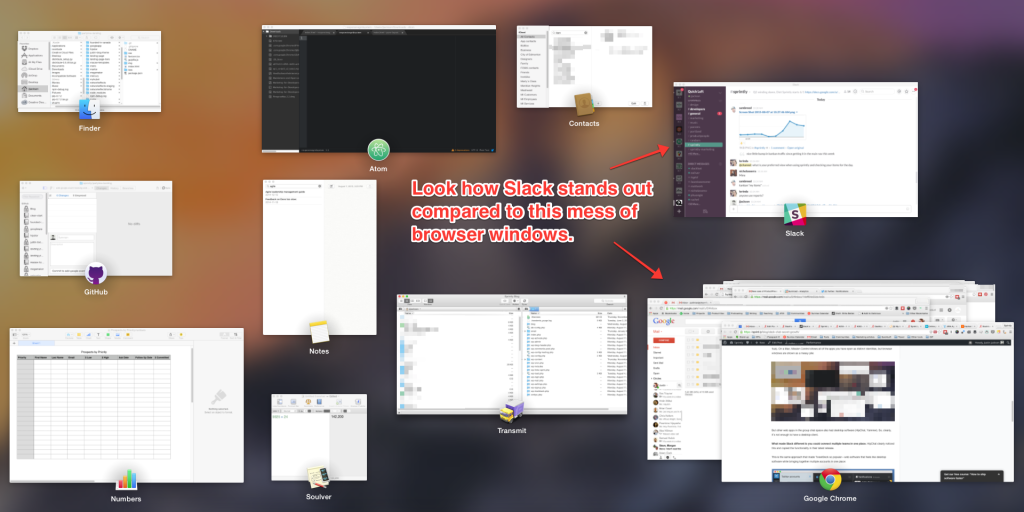 But other web apps in the group chat space also had desktop software (HipChat, Yammer). So, clearly, it’s not enough to have a desktop client.

What made Slack different is you could connect multiple teams in one place. HipChat clearly noticed this and copied the functionality in their latest release.

This is the same approach that made TweetDeck so popular—web software that feels like desktop software while bringing together multiple accounts in one place:

And GitHub’s desktop app allows developers to view and edit multiple repos (from different teams) in one place:

It’s easier than ever to make web applications. This, combined with the lure of recurring revenue, has led to an influx of SaaS companies in the market. Standing out might mean stepping outside the web browser. (If you’re looking to create a desktop client, this is a good place to start.)

Want to do project management in Slack? Partyline allows you to create, edit, and search tickets, all within Slack.